When a Korean barbecue place wants to set itself apart from all the other Korean barbecue places, it has essentially three variables to play with: meat, heat and sides. (In this way it is similar to American barbecue, which it otherwise doesn’t resemble at all.) Cote, which has been wielding scissors and tongs on West 22nd Street since June, is resoundingly in the meat camp.

Specifically, the meat that Cote grills is prime beef aged anywhere from a week to four and a half months in a cooler downstairs, next to a small lounge. Like Gallagher’s, Cote hangs the sirloins, rib-eyes, hangers, skirts and so on behind glass so customers can inspect the inventory. Unlike Gallagher’s, Cote floods the room with light the color of restaurant supplies, making it look like a set from “American Horror Story: Steakhouse.”

The two dining rooms upstairs aren’t nearly as gothic, although they are dark and moody. The walls are painted a deep blue-green, the floors are raw concrete, the tables are black soapstone. It is not exactly a date place — the hard surfaces amplify noise a little too well — but it is not exactly not a date place, either. People dress up to eat at Cote (it sounds like coat), perhaps because the Japanese-built yakiniku grills set into the center of the tables emit almost none of the smoke that can weave its way into your clothes after a night in one of the remaining barbecue palaces on 32nd Street.

After taking cocktail orders (the rosé slushie, decorated with a paper flamingo, tastes the way wine does when you are 8 years old), servers will offer a tour of the menu covers that ends with a strong endorsement of the “butcher’s feast.” This is a set menu, at $45 a person, with fluffy steamed eggs in a pot, two fundamental Korean stews, pickles, lettuce and, at the center of it all, a dealer’s choice of four cuts of beef. After all that has been cleared, vanilla soft serve under a squiggle of soy caramel appears in little paper cups with little wooden spoons.

The meats at my most recent butcher’s feast were hanger steak, the reddish-purple of a brand-new bruise; a rib-eye together with a flap of rib-eye cap, both pink and spiderwebbed with white veins of fat; a thickish slab of flatiron steak, said to be the product of a cow who had Wagyu on one side of the family and Angus on the other; and finally galbi, short ribs in a sweet soy marinade. The other cuts in the butcher’s feast vary but galbi is a constant, as it should be.

The meats came out early, while the gas grill warmed up. The wire cage over it was primed with a cube of beef fat, and then the beef went on, one cut at a time. Our server turned the meat once, then walked away, and one of my guests started to worry that the meat would burn. But the flames were low, and the beef browned gradually.

The gas burners at Cote will never give you the sharp, dark, crackling edges that you find in the charcoal-grilled meats at Mapo Korean BBQ in Queens (and almost nowhere else in the city). The beef, though, is in all likelihood the best at any Korean barbecue place in New York. Its two closest competitors for steak supremacy are probably Kang Ho Dong Baekjeong and Gaonnuri, and neither can match Cote for richness and concentrated flavor. 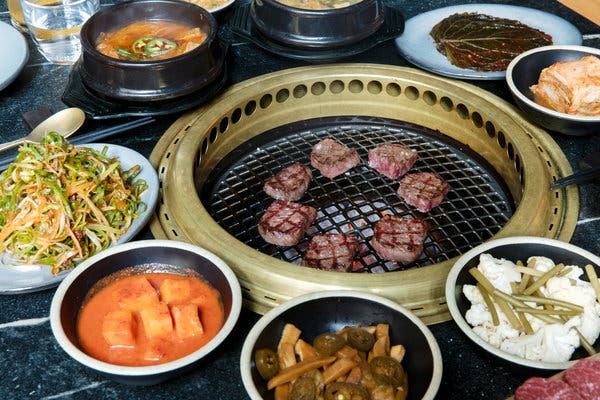 One night I ignored the butcher’s feast path and went off-road so I could try some sirloin that had been ripening downstairs for 138 days. Steaks aged that long are often described as funky, but the word doesn’t cover this piece of meat. It tasted like something other than beef, or maybe beyond beef, more condiment than protein. At $80 for six ounces, it was not my cup of barley tea, but it may be yours.

Next time, I’ll stick to the road more traveled by. The butcher’s feast takes in most of the menu’s highlights, avoids the lowlights, and does so at a very good price for a steak supper.

No matter what or how you order, though, you will have to contend with Cote’s notions of when to serve the condiments and side dishes that make the difference between Korean barbecue and a heap of grilled meat. Pickled cauliflower and soy-marinated chayote (both very good), lettuce and ssamjang (the fermented bean paste) arrive as the beef starts cooking. Rice doesn’t turn up until midway through the meal, when you’re finally brought pickled daikon, kimchi, kimchi stew and fermented bean-paste stew. Gochujang may show up at the beginning or at halftime.

There is no one right way to eat Korean barbecue, but people who like to bundle the meat into lettuce or shiso with a lump of rice and a pickled cabbage leaf will wonder why Cote parcels the side dishes out in stages.

That isn’t the only case of the missing kimchi. I couldn’t taste it in the fried rice “paella” with kimchi and Wagyu. The dish didn’t have much in common with paella, either. I wouldn’t care what it was called if it were delicious, but like some of the other attempts to loosen Korean custom, it came off as timid.

Simon Kim, the owner, keeps saying in interviews that Cote is a Korean steakhouse. I understand why he wants to draw attention to the steak, but anybody who shows up expecting a kimchi-fied Smith & Wollensky is going to be very confused.

You will search in vain for a baked potato or creamed spinach on David Shim’s menu. You can, however, get a shrimp cocktail with gochujang cocktail sauce, an idea that’s not as good as it sounds. You can eat an adapted wedge salad with candylike lumps of bacon and an unresponsive tofu-sesame dressing. And, in a homage to Peter Luger, there is bacon as an appetizer, which turns out to be unsmoked and uncured pork jowl. It’s better with a smear of ssamjang, but then most everything is.

More traditional Korean dishes tended to taste more complete. If you want more starch than rice alone, the skinny wheat noodles in hot anchovy broth are simple and delicious. Cold noodles stirred at the table with slivered apples, lettuce and gochujang are spicy, sweet and refreshing. There’s a very good dolsot bibimbap, with a chewy bottom crust where the rice meets the searingly hot bowl.

Aside from the meat locker, the other useful idea Cote borrowed from steakhouses is a wine list that is chosen with beef in mind and can run into real money if you’re not careful. Anyone hoping to find a red for less than $100 will find that a quick glance at, say, California or the Côte d’Or can be discouraging. But Victoria James, who wrote the list, found some pockets of affordability in Beaujolais, Southern France, Corsica and Switzerland, and she makes a small adventure out of the wines by the glass, all poured from magnums.

Does Brouilly go with ssamjang? Can a Patrimonio get along with galbi? I didn’t know I wanted answers to these questions before Cote came along, but now I do.